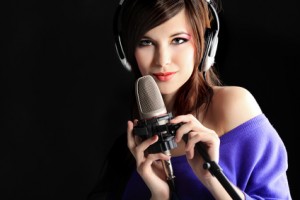 What type of microphone should I use?

Which polar pattern should I select?

A cardioid pattern is the preferred choice for many recording engineers. With a cardioid pattern selected the mic picks up the sound mostly from the front thereby eliminating unwanted noise or spill from the rear or sides. This is particularly useful if you are recording vocals at the same time as recording other musicians in the same room or if you want more of the vocal and less of the room sound in your recording.

Should I use a shock-mount?

It’s generally a good idea to use a shockmount as it will absorb vibrations which would otherwise cause bassy thumps on your recording.

Should I use the microphone’s low pass filter?

How far from the microphone should I stand?

Generally speaking 6 to 10 inches from the mic should be about right. Bear in mind, the closer you get to a condensor mic the bassier it becomes. This is known as the proximity effect. In some instances this can be a desireable sound. If you want a more ambient ‘roomy’ sound you can try moving the mic a little further away.

Should I use a pop shield?

Pop shields help reduce sibilance, the unpleasant spitting sound produced when an ‘s’ or ‘t’ sound is made. Mesh pop shields are far more effective than the foam type which tend to do nothing more than roll off the top end of the vocal making it sound a little dull.

Where in the room should I position the microphone?

It’s best to try to capture a dry recording of the vocal so that you have lots of scope for creating the desired ambience later on by adding reverbs or delays. Position the mic as far from the rooms boundaries as possible and make sure that there isn’t a reflective surface directly behind the singer. Positioning the mic somewhere near the centre of the room but not exactly in the middle should work fine. Record some test vocals with the mic in various positions until you get the sound you’re after.

Should I use compression whilst recording?

A little bit of compression whilst recording can even out the signal and help prevent the singer from overloading the input. Be careful not to over compressor at this stage as you cannot undo the compression once it’s recorded. If you are recording into a digital system, compress in the analogue domain in order to get the best out of your analogue to digital convertors.

Should I use reverb on the voice for monitoring?

A little bit of reverb in the singers headphones can help them pitch more accurately. Of course how much, if any at all is up to the singer, whatever works to get the best performance out of them.

If you find this site useful please consider making a donation to help keep it online!

This site uses Akismet to reduce spam. Learn how your comment data is processed.

This week’s Free Plugin is a a bitcrusher effect plug-in with a distinctive legacy. Based on the Sega Genesis sound chip, the 8-bit decimation is inherited from the FM synth’s PCM playback feature, packed in a simple and compact effect unit. And it’s free! ... See MoreSee Less

This week’s Free Plugin is a a bitcrusher effect plug-in with a distinctive legacy. Based on the Sega Genesis sound chip, the 8-bit decimation is inherited from the FM synth’s PCM playback feature...
View on Facebook
· Share

Collaborate across DAWs for free with Mixed In Key’s Satellite Plugins 2.0Upload, download and edit stems with one intuitive plug-in. ... See MoreSee Less

Collaborate across DAWs for free with Mixed In Key’s Satellite Plugins 2.0 | MusicTech

Mixed In Key's Satellite Plugins 2.0 is a free plug-in suite that lets you remotely collaborate across DAW and operating systems.
View on Facebook
· Share

New products added to the Record, Mix and Master store:

Icing on the cake 👌 @soundtheoryltd #gulfoss #a

Giving a #bass line some attitude with @soundtoys

Great to see Nick @giraffeaudio wearing one of our

Any cookies that may not be particularly necessary for the website to function and is used specifically to collect user personal data via analytics, ads, other embedded contents are termed as non-necessary cookies. It is mandatory to procure user consent prior to running these cookies on your website.