What is an Expander? 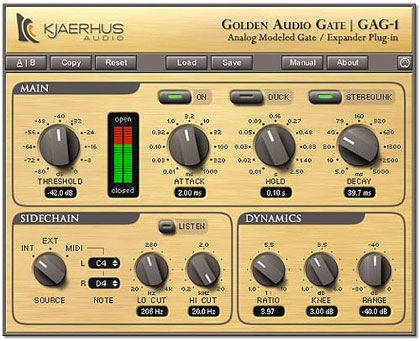 Expanders increase the difference in loudness between quieter and louder sections of audio making quiet sounds quieter and loud sounds louder.  They are pretty much the opposite of compressors working by turning down the volume when the signal level falls below the threshold and turning the volume back up when the signal level goes above the threshold.

Expanding is useful when you want to increase the dynamic range of the audio. For example, when you have a noisy recording and want to reduce the volume of the quieter parts so you don’t notice the noise as much.   A side effect of expanders is that they change the way sounds decay and can end up silencing quieter parts of your audio that you want to keep.

The main controls on an expander are: attack and release times, and ratio.

The attack time sets how fast the expander responds to signal levels above the threshold.

The release time sets how fast it reacts when the signal level drops below the threshold.

The ratio determines how much to turn the volume down. A higher ratio results in the volume being turned down more. A very high ratio of 12:1 or more is considered a noise gate.

This site uses Akismet to reduce spam. Learn how your comment data is processed.

There’s a lot to think about when you’re recording and mixing vocals, from the preparedness of the singer to the perils of over-processing. Here are some of the slipperiest potential banana skins ...
View on Facebook
· Share

The New Marketing Scams In Music ProductionThere’s some new marketing messages doing the rounds in the world of music production. They are being used to encourage a new generation of music makers to buy all sorts of stuff they don’t need and to subscribe to plans they can’t afford. We expose them and tell you why it’s a scam.Spend any time on social media and you’ll start seeing adverts aimed at those wanting to get into music production. Futhermore, irrespective of the product they all use similar ways to get people to buy or sign up. ... See MoreSee Less

There’s some new marketing messages doing the rounds in the world of music production. They are being used to encourage a new generation of music makers to buy all sorts of stuff they don’t need a...
View on Facebook
· Share

RESOLUME REVIEW AND SUMMARY OF USE WITH ABLETON LIVE LINK

Added a bit of tasty Strudel to the mix! It's like warm soup on a winters day! 🙂 https://www.instagram.com/p/CU-CvcXgPx7/?utm_medium=twitter

Added a bit of tasty Strudel to the mix! It's like

Icing on the cake 👌 @soundtheoryltd #gulfoss #a

Giving a #bass line some attitude with @soundtoys

Great to see Nick @giraffeaudio wearing one of our

This website uses cookies to improve your experience while you navigate through the website. Out of these cookies, the cookies that are categorized as necessary are stored on your browser as they are essential for the working of basic functionalities of the website. We also use third-party cookies that help us analyze and understand how you use this website. These cookies will be stored in your browser only with your consent. You also have the option to opt-out of these cookies. But opting out of some of these cookies may have an effect on your browsing experience.
Necessary Always Enabled
Necessary cookies are absolutely essential for the website to function properly. This category only includes cookies that ensures basic functionalities and security features of the website. These cookies do not store any personal information.
Non-necessary
Any cookies that may not be particularly necessary for the website to function and is used specifically to collect user personal data via analytics, ads, other embedded contents are termed as non-necessary cookies. It is mandatory to procure user consent prior to running these cookies on your website.
SAVE & ACCEPT